“Billy (Holland) spoke at his funeral, and said there were two looks; there was the furrowed brow, and then there would be eyes almost closed and the big beaming smile,” says John Kelly, one of the many former Munster players who hardly knew a Munster without Jerry Holland, who passed away at the age of 66 last month, following illness.

“He was an integral part of my rugby journey in Munster, and I know he was that for a lot of people, if not all of the guys in our group,” Kelly continues.

“He wasn’t necessarily the guy who was out front of house taking all the credit, but he was the guy who made sure everything else ran sufficiently and operated correctly. He was in the background all the time. He was such an important part and such an integral part of our journey.

“When I got the news on the Sunday morning that Jerry had passed away, it actually rocked me an awful lot. I think it rocked a lot of us.” 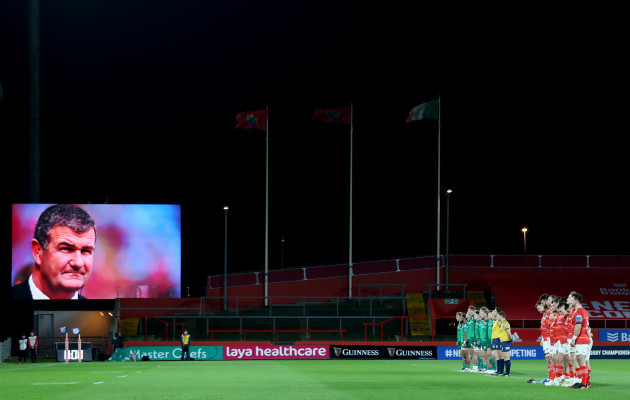 James Crombie / INPHO
The Munster and Connacht teams stand for a minute’s silence for Jerry Holland.

The Holland those players knew was the man who helped Munster step out of the amateur days into the brave new world that was professionalism.

After a long playing career – which included three caps for Ireland – the Cork Con clubman made the move into coaching, leading Munster to two Interprovincial Championships between 1994 and 1997. In 2000, he was appointed team manager of a group that would go on to become legendary figures in Irish sport across the next decade.

“When I started with Munster in ’97, it was very disparate,” remembers Kelly, who was capped 154 times across a 10-year career with the province.

“We were kind of amateurs playing professional rugby. Jerry had a big part in us moving into being proper professionals.

“You had a Cork/Limerick divide, then you had a Limerick divide in itself between Garryowen, Young Munster and Shannon. We were not a unit. Deccie (Declan Kidney, head coach) wasn’t exactly liked by a lot of the Limerick guys at the start. There would have been question marks about Niallo (Niall O’Donovan, assistant coach) from the Cork guys, but Jerry was the rock at the top of it all.

He was hugely respected by everybody in the squad, and there were strong characters there. For the younger guys… He was a big man, a big character, he had a booming voice. He just exuded authority. But he also had that gentle side of putting the arm around the shoulder and having the laugh, that big booming laugh. He had that perfect balance.

“He was stern and he was fearless, and he was a strong man, but he was also a really kind and really gentle person in so many ways as well.”

His messaging tended to be simple and to the point. Ronan O’Gara recalls rocking up to training after getting his hair bleached on a lads holiday in 1997. “That’ll be gone by Thursday”, quipped Holland. The young O’Gara duly followed Holland’s orders from him.

The Corkman has now followed Holland in making the transition from coach to player, where he’s already added another Champions Cup medal to his CV with La Rochelle.

Speaking from France, there’s a long pause on the other end of the line when The42 asks O’Gara about the role Holland played across his Munster career.

“When you’re the player, you don’t appreciate it,” O’Gara says. “It’s with hindsight that you appreciate how good people are, that’s maybe something that happens when you mature a little bit. 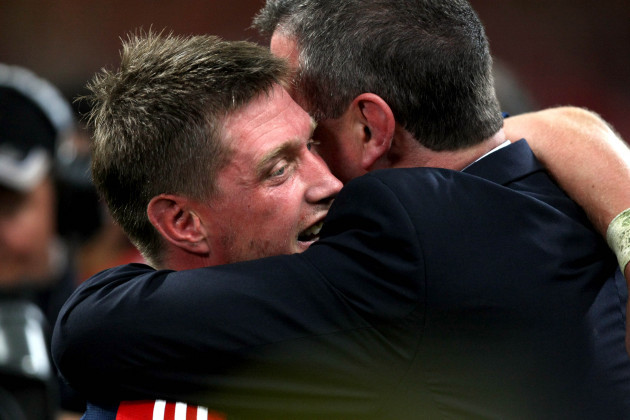 “But then when you get into the coaching game… What coaching essentially is is you’re trying to get the best out of the people around you, be it staff or players, and making them feel good about themselves and for them to be authentic , to express themselves.

“And Holl used to just put me in a good mood, you know? He had a great sense of humour, he was easy to slag but he was also very good at slagging me, whipping me into shape and cutting me down to size.”

In Holland, those Munster players knew they had a man who commanded respect, but also a man they could trust.

“He didn’t take any messing,” says Kelly. “But once he was part of your team and once he was on your side, you knew that you had a backer and he was going to support you. That’s what you really respected Holl for.

I’ve seen him pull guys out of scrapes, protect guys, back in the days when there was no social media or camera phones. There were instances over the years, that I couldn’t really talk about, but Jerry was the one who was the rock of sense, who would have sorted things out.

“There was a famous incident many years ago where there was a bit of a row in a game… We came back in on the Monday, and you’d never get away with this now, but Jerry was sitting at the front and he said ‘There’s one thing I want to talk about, I want to talk about what happened at the weekend, and I want to say one thing, and that’s – well done.’

“We were all blown away, but basically because the squad had actually protected each other and backed each other up, that was the important thing to him. It’s funny, even as I’m telling you the story I’m thinking ‘Jesus, Jerry would kill me for telling this!’” 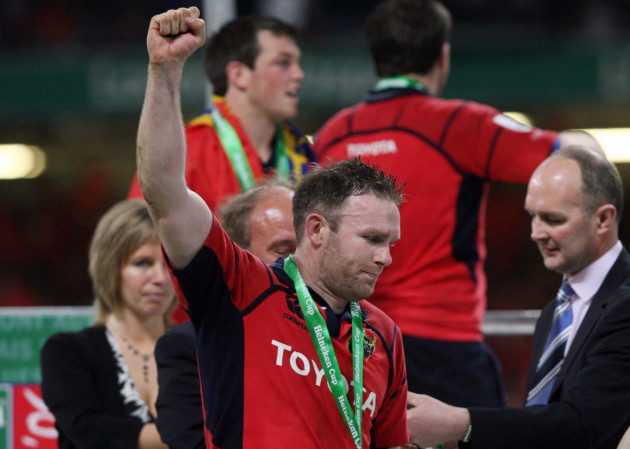 The young group that Holland helped mold into hardened pros would eventually go on to become Munster legends thanks to the European Cup wins of 2006 and 2008. It was a competition Holland loved, having been there for the earliest days of the ambitious new competition in the mid-nineties.

“When I think of Jerry and Europe, I think of him sitting at the top of the bus in France, telling us to number off to make sure we were all there, and then being the guy who celebrated (2006) with us in such a special way,” Kelly continues.

“There’s pictures of him on the sideline in Bordeaux in 2000 when we beat Toulouse [in the semi-finals]and that year was when the European journey really kicked off for us.

It’s not like there’s this massive moment where he said something, but I just remember him being present and being there, being the guy who kicked off the meeting, the guy who was in the team room with the old Bank of Ireland Munster polo shirt on . Always calm and relaxed even though we were going into one of the biggest games of our lives.

“He was the guy there with the big smile on his face, and he was just able to set a tone around Europe. You knew Europe was special, but he was able to keep you level and resonate that calmness and confidence.”

O’Gara draws a line from his time with Holland to the present day, and the type of coach he is striving to be at La Rochelle. 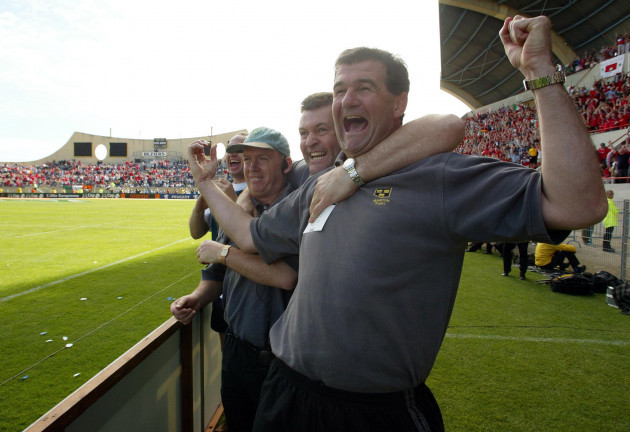 “He was mad on discipline,” O’Gara smiles, lowering his head to offer up his best Jerry Holland impression: “Boys, discipline now today… But that stuff, it sticks with you. Having discipline is such a key behavior in the modern game but for modern players nowadays, even players I coach, they think it’s a word. But discipline as a word is nothing, discipline as a behaviour is changing habits, it’s becoming consistently good at the things that don’t take talent. Being consistently good at respecting the time and setting first. It was little things like that.”

Then there was Hollands ability to lift people up. When O’Gara was just another young buck in an intimidating Munster dressing room, Holland was the one who helped him feel he belonged there.

“He was obviously from [Cork] Con and that’s where I was, but you’ll forget sometimes how good people were to you from the ages of 18-23. After that, you kind of kick on because you’ve established yourself, but there were times there that I certainly felt that I was way out of my depth. Holl was able to make me feel real in a Munster dressing room with a lot of legends.” 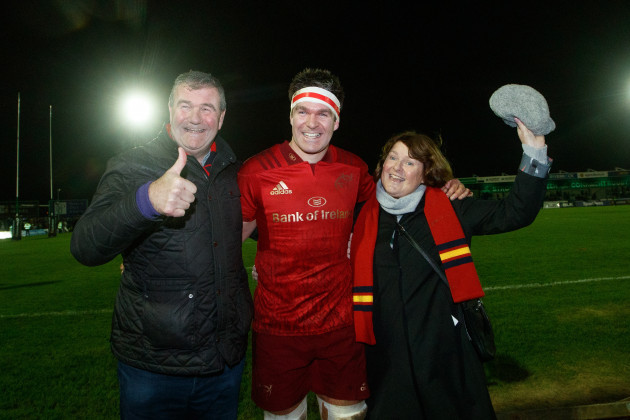 James Crombie / INPHO
Jerry and Jean Holland pictured with their son, Billy, after he won his 200th Munster cap.

Jerry Holland was laid to rest in Blackrock on 15 November, following a funeral mass in Rochestown where family, friends, and Munster players young and old gathered to pay their respects.

Tonight many of them will gather again on a cold Limerick night at Thomond Park. Munster v Leinster was always a fixture Jerry Holland enjoyed – while Munster through and through, Holland also represented Leinster during his playing career.

“It’s funny,” Kelly adds. “For Niall O’Donovan it was always about beating Ulster, but definitely for Jerry, beating Leinster was the benchmark.

“He was able to tap into a certain element of a chip on the shoulder or an inferiority complex. You always felt there was this thing that the guys up the road think they’re better than us, or think they’re better players than us, but we always felt like well, we have a better team. Jerry was always able to tap into that. They might have 15 better players, but the 15 of us together was better.”