GRAHAM ROWNTREE WALKS into the Northampton Saints press room a happy man, beer in hand, fresh from watching his team secure a first Champions Cup win of the season with a hard-earned 17-6 defeat of Northampton Saints.

Two first-half tries from Gavin Coombes laid the platform at Franklin’s Gardens yesterday, with the visitors then producing a huge defensive shift across an intense, scoreless, and at times fiery second period.

It was, to lean on an old cliché, a game of two halves – the first full of excitement, the second full of grunt.

“We were never in control at half-time,” Rowntree said.

“We made that point to the lads. There was a lot of stuff we needed to do better. It was all about the next 10 minutes and we had a chance. We were playing well, going into their 22 and we made a couple of errors and spent the rest of the second half defending.

“So half-time was about being better. I didn’t anticipate such a defensive workout in the second half, constantly on our goal line but going forward it will do us really good.

“It will show what we do in training works, in a big competition,” he added.

There was a lot riding on this game. We were disappointed after last week and coming here was always going to be hard in dealing with their attack, their width and their tempo. So it’s huge for us going forward.

“It will give us a nice build-in to next week because we’ve got three games over 11 days over Christmas. It’s going to be all hands on deck but this will give us a launchpad into that hopefully.”

Naturally, Rowntree was keen to praise Munster’s defensive effort in that second half and highlighted the work being done on the training pitch by defense coach Denis Leamy. At the break Munster had enjoyed 62% of the possession and 69% of territory. Like the final whistle, those numbers had dropped to 44% and 41%. 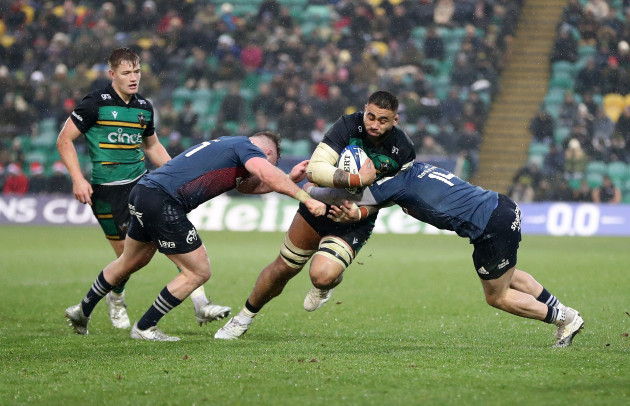 This was very much a team effort against a Northampton Saints side who were disappointing on the day, but have been tough to beat at home this season.

“I thought our maul was pretty good and honest, the scrum pretty much was good but just our ability to get off the floor – work, get up, kick, get up, work for the guy next to you. That says a lot about us.

“Half-time was composed but we weren’t where we needed to be and they needed telling that, but delighted with the result, a must-win game for us going forward. Now we’ll look forward to next week.”

Next week sees Leinster visit Thomond Park for a St Stephen’s Day URC derby. Munster can now head into that fixture on the back of some positive momentum generated since the November international window.

The challenge for them now it to build on those promising performances across a testing Christmas period. 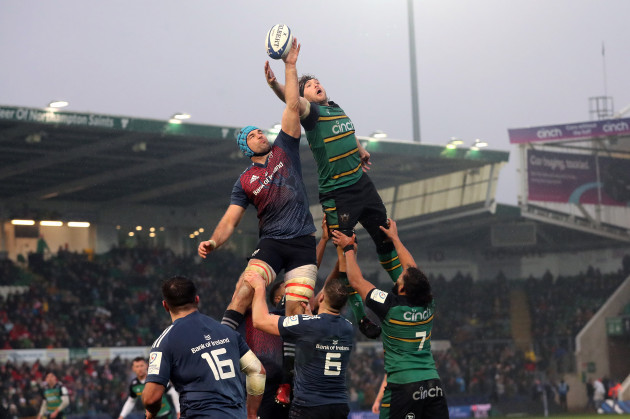 “We talked about this during the week that this was a big, pivotal game for us,” added Munster prop Jeremy Loughman.

“To come away from home and win, it’s a tough place to come.

A serious performance in the second half from the lads. I think for pretty much the whole second half we were on our line there. We nearly got up the top at the end there but it was an incredible from the lads to dig deep and get that, and even with the three yellow cards.

“I think like that when you’re away from home, that’s proper stuff, to hold a team out like that, and they were going hard at us. They’re a good team, they had a big physical pack out today, they picked some big players, some big ball-carriers, and we just kept them out and kept going.

“Even with the penalties racking up against us, we kept calm and we just going and some of the lads – I think it was Gav (Coombes) who pulled out a massive turnover and we got those line-out turnovers. It was incredible from the lads.

“It gives you energy. It’s as good as scoring a try. Obviously it would have been nice to score a few more tries but to do that was unbelievable.”

While Rowntree felt it was very much a collective effort, he did praise Antoine Frisch for his role in the win – the center making a series of excellent defensive reads as the Saints piled on the pressure in the second half.

“He’s class isn’t he? He’s quietly developing into a very good player for us in defence. Im delighted with that signing.”

Another positive footnote on a hugely positive day for Rowntree and Munster.