ANDY FARRELL HAS included Leinster out-half Ross Byrne in his Ireland squad for the upcoming Six Nations, but there is no place for Munster’s Joey Carbery.

Captain Johnny Sexton and tighthead Tadhg Furlong are both named as they continue to recover from injury, but center Robbie Henshaw misses out due to a wrist injury.

Sexton is expected to be fit for Ireland’s opening fixture away to Wales on 4 February, with Leinster teammate Byrne included after his strong run of form on the back of returning to the international fold to kick a match-winning penalty against the Wallabies in November.

Leinster center Jamie Osborne is the only uncapped player in the 37-man selection. The versatile 21-year-old spent time in Ireland camp last November and featured for Ireland A in their loss to a New Zealand XV at the RDS. 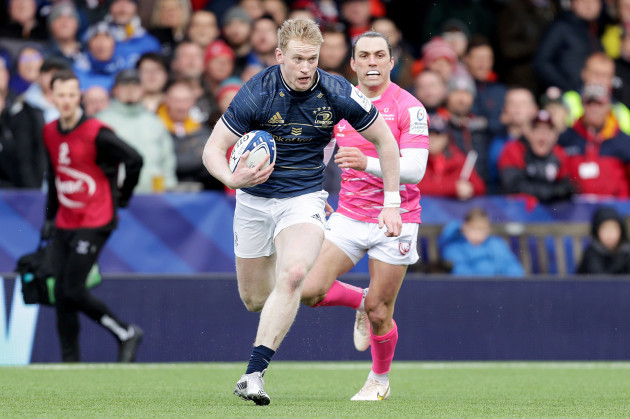 Laszlo Geczo / INPHO
Leinster’s Jamie Osborne in the only uncapped player in the squad.

Munster backrow Gavin Coombes is called up alongside experienced pair Keith Earls and Conor Murray – who were both dropped for Munster’s Champions Cup clash with Northampton last weekend.

Jordan Larmour returns to the squad having missed the November internationals due to injury while Ulster’s Mike Lowry, Robert Baloucoune and Munster’s Calvin Nash, who were all part of the November Series squad, are not named. 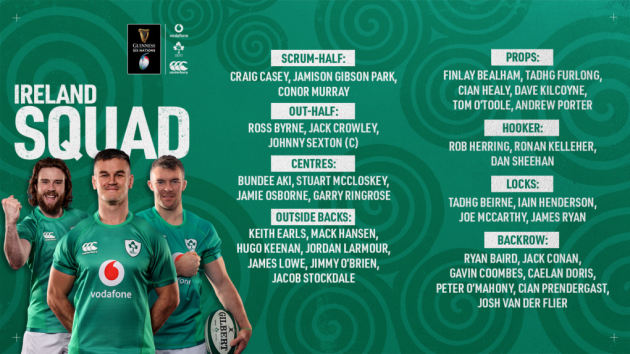 “The Six Nations is a huge competition for us and another opportunity for us to grow as a group,” said Ireland head coach Farrell.

“2022 was a busy year as we got to work with a larger group of players as we continued to build our squad depth and competition for places.

“While there are a few players carrying knocks and others that have missed out on selection for the start of the tournament, they will have the opportunity to push their case playing for their provinces in the URC over the coming weeks as no doubt we will need to call upon the wider group as the tournament progresses.”